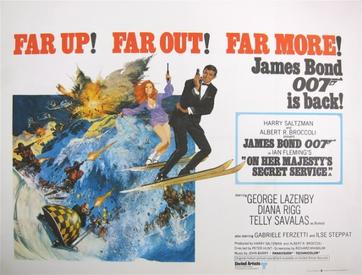 On Her Majesty’s Secret Service is a British spy film and the sixth in the James Bond series produced by Eon Productions. It is based on the 1963 novel of the same name by Ian Fleming. Following Sean Connery‘s decision to retire from the role after You Only Live Twice, Eon Productions selected an unknown actor and model, George Lazenby, to play the part of James Bond. During the making of the film, Lazenby announced that he would play the role of Bond only once.

In the film, Bond faces Blofeld (Telly Savalas), who is planning to hold the world ransom by the threat of sterilising the world’s food supply through a group of brainwashed “angels of death”. Along the way Bond meets, falls in love with, and eventually marries Contessa Teresa di Vicenzo (Diana Rigg).

It is the only Bond film to be directed by Peter R. Hunt, who had served as a film editor and second unit director on previous films in the series. Hunt, along with producers Albert R. Broccoli and Harry Saltzman, decided to produce a more realistic film that would follow the novel closely. It was shot in Switzerland, England, and Portugal from October 1968 to May 1969. Although its cinema release was not as lucrative as its predecessor You Only Live Twice, On Her Majesty’s Secret Service was still one of the top performing films of the year. Critical reviews upon release were mixed, but the film’s reputation has improved greatly over time.

Whilst on leave, British agent James Bond prevents a young woman, Tracy Draco, from committing suicide. Her father is the head of a powerful crime syndicate who is impressed by Bond and wants him to protect his daughter by marrying her. In exchange he offers Bond information which will lead 007 to his arch enemy Ernst Blofeld. At first Bond agrees to the deal purely to fulfil his objective to kill Blofeld but later he grows to love Tracy but when the British learn that Blofeld plans to destroy mankind with a deadly virus, 007 is torn between his loyalty to his county and his intent to marry Tracy. [IMDb.com]

This site uses Akismet to reduce spam. Learn how your comment data is processed.